Thank you to Ts̓zil’s Advanced Education Coordinator Linda Epp for organizing another very successful Sisters in Spirit Vigil in Whistler. The annual event, which is held every October 4 in communities across the country, is an initiative of the Native Women’s Association of Canada to raise awareness about Canada’s more than 1100 murdered and missing aboriginal women. 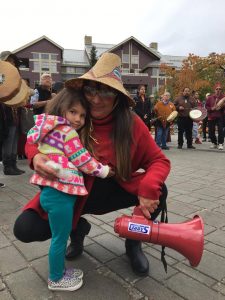 Tuesday’s Sisters In Spirit Vigil  which included speeches, remembrances, and singing and drumming was attended by more than 150 people. Both Líl̓wat and Squamish Nations were well represented at this gathering on shared Territory. Dignitaries from both Nations and community members who had sustained the losses of love ones shared stories of injustice; pain and suffering that moved many to tears. Líl̓wat community member Lorna Leo, who carried a  photo of her missing sister Susan, spoke to those present about not knowing the fate of a loved one who disappeared in 1969 as a beautiful, vibrant 18-year-old girl.

Chief Skalulmecw Dean Nelson called upon First Nations men to protect the women in their lives and for all men to work to stop violence against women. He also spoke about the importance of non-First Nations working to raise awareness and lend their voices to reconciling this national shame, a human tragedy of immense proportions.

Esteemed Elder, Councillor Saw̓t Martina Pierre, also spoke making the point that not only people needed to heal, but the responsibility we all  shared to heal our mother — Mother Earth. She addressed the need to recognize the value of aboriginal women and the necessity for everyone to work together.

Councillor Pierre then led the assembly, which was about 40 per cent non-First Nations, in a rendition of the Woman Warrior song as the group marched from the Welcome Totem in Village Common to Whistler Olympic Park for a moment of silence and life-affirming saq̓úta. A reception at the SLCC followed.