Youth from Líl̓wat Nation and Carcross/Taglish First Nation came together to explore opportunities and issues in tourism. The result is the short-form documentary, I Tsuwa Sa Stsmàlt (Belongs to the Youth), which debuts next month at the San Francisco at the 43rd Annual American Indian Film Festival. 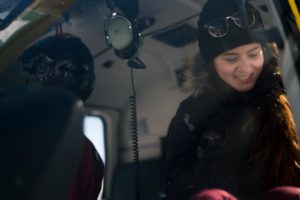 Mallory Ritchie checks out the helicopter.

Local youth Mallory Ritchie (and Solstice Andrew (right) will be on the big screen at the 43rd Annual Indian Film Festival (AIFF) in San Francisco on November 9. The two Xet̓ólacw Community School (XCS) high school students are featured in the short documentary I Tsuwa Sa Stsmàlt (Belongs to the Youth), which will have its world premiere at the festival. The 15-minute film directed by Joey Arseneau documents the trip the students made to the Yukon to explore eco-tourism. Art direction and photography was provided by Joey Bidner. 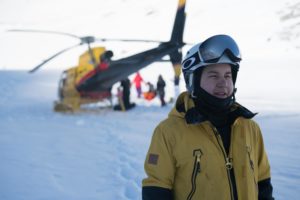 Solstice Andrew steps out into the outback.

“Mallory and Solstice were chosen for the trip because they are good at academics and are both outstanding athletes, a skier and snowboarder, respectively,” says Chris Britt, a professional backcountry guide and XCS instructor who was raised in Whitehorse.

Britt has been instrumental in organizing the project that brings youth from Líl̓wat Nation together with others from Carcross/Tagish First Nation. To get things going two years ago, Britt, who also heli-ski industry, called his old heli-ski boss in Whitehorse, who had been adopted by a Carcross/Taglish family, to create a unique ski and snowboard camp experience that would have the added bonus of opening the door to careers in eco-tourism for First Nations youth.

The film shows how ecotourism operators can build positive relations with the First Nation people who oversee the Traditional Territory where the operators hold tenure. The film also examines creating opportunities and breaking boundaries down for the youth in the area and other First Nation communities who want to work in the industry.

Britt will be launching a website featuring the film’s trailer at the beginning of November. We will be posting that information here and on Facebook when it becomes available.

Congratulations to Mallory Ritchie, Solstice Andrew and Chris Britt. The Líl̓wat Nation extends its best wishes for every success as the AIFF.